The five-day program, led by senior FMCS staff, introduced a variety of professional topics including administrative procedures, mediator code of conduct and ethics, the history of FMCS, the National Labor Relations Act and alternative dispute resolution.

FMCS Deputy Director Scot Beckenbaugh welcomed the new mediators as “the newest members of the FMCS family,” he said. “Our primary goal throughout this week is to provide our mediators with the highest levels of training, allowing them to best support labor-management negotiations in the field and support the institution of collective bargaining.” 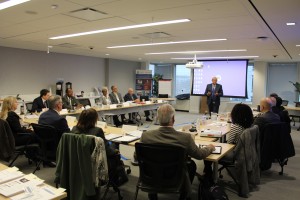 WASHINGTON, DC (March 20, 2018) Federal Mediation and Conciliation Service (FMCS) Deputy Director, Scot Beckenbaugh, welcomes a group of new federal mediators from around the country at the FMCS headquarters. The mediators were at the headquarters to attend a five-day training program to prepare them for their role in helping to resolve labor-management conflicts, build better relationships, and create more effective organizations. (FMCS Photo/Heather Brown)

Mediators from FMCS provide a multitude of services to both the public and private sector to build labor-management partnerships, manage conflict, and avert or mitigate the damaging effects of workplace disputes. Many of the new mediators are already experienced labor-relations professionals, with expertise in resolving labor-management disputes, building labor-management relationships, and alternative dispute resolution for government agencies. FMCS equips them to help build better relationships through joint problem-solving and by advocating constructive responses to inevitable conflict. Organizations that reduce conflict become more efficient, creating more value for customers, shareholders and employees alike, and substantially benefit the national economy.

“This was very helpful training,” said Antionette Turner, one of the new mediators attending the course. “The best part was that I learned a lot of techniques from very experienced mediators that help shed light on how to be most effective and value-added to the parties I will be assisting in negotiations.”

Mediators arrived in Washington from across the country, representing some of the more than 60 FMCS field offices and 10 regional offices. Although new to federal mediation, all the mediators are experienced in labor-management negotiations whether on the labor side or the management side.

“With my previous background as a union representative, I wanted to take my experience into another level of development,” said Tim Healy, a new mediator based out of Chicago. “I’ve used FMCS in the past and respect their mission statement. I’m grateful to be aboard.”

At the end of the training, the new mediators returned to their respective field locations to continue working alongside more seasoned FMCS mediators until they begin working their own cases.

“I’m excited to develop this skillset and use my position as a neutral to help facilitate better relations among disputing parties to hopefully avoid strikes or lockouts and get everyone to a place they are equally comfortable with,” said Healy.

FMCS, created in 1947, is an independent agency whose mission is to preserve and promote labor-management peace and cooperation. Headquartered in Washington, DC, with ten regional offices and more than 60 field offices, the agency provides mediation and conflict resolution services to industry, government agencies and communities. 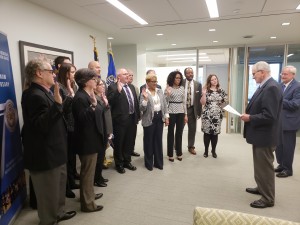 WASHINGTON, DC (March 20, 2018) John Pinto, director of field operations for the Federal Mediation and Conciliation Service (FMCS), administers the oath of office to a group of new federal mediators from around the country at the FMCS headquarters. The mediators were at the headquarters to attend a five-day training program to prepare them for their role in helping to resolve labor-management conflicts, build better relationships, and create more effective organizations. (FMCS Photo/Greg Raelson)