WASHINGTON, D.C. — The Federal Mediation and Conciliation Service (FMCS) commissioned 18 new mediators March 19, 2019 in its Washington, DC headquarters as part of an annual ceremony and training program designed to prepare new mediators for their role as dispute resolution and conflict management experts, providing services to labor and management during contract negotiations, workplace disputes and other workplace issues.

The mediators arrived from across the country for the five-day program led by senior FMCS staff. A comprehensive and holistic training program, the new mediators will be introduced to a variety of professional topics including transitioning to a neutral, administrative procedures, mediator code of conduct and ethics, FMCS history, the National Labor Relations Act and alternative dispute resolution. 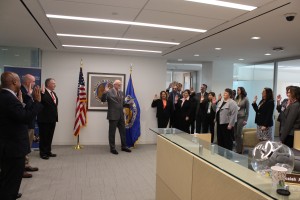 WASHINGTON, DC (March 19, 2019) Federal Mediation and Conciliation Service (FMCS) Deputy Director Richard Giacolone administers the oath of office to a group of new federal mediators from around the country at the FMCS headquarters. The mediators were at the headquarters to attend a five-day training program to prepare them for their role in helping to resolve labor-management conflicts, build better relationships, and create more effective organizations. (FMCS Photo/Heather Brown)

FMCS Deputy Director Richard Giacolone, himself having more than 23 years as an FMCS mediator, welcomed the new mediators and spoke about their joining the agency at a critical time of change.

“It’s exciting to see a group of folks who are coming into the agency as we evolve from a focus on mostly resolving labor-relations disputes to a workplace conflict management agency focusing on more than just the labor-relations side,” Giacolone said. “We are getting into some very new and exciting work on both the domestic and the international side and in very sophisticated areas like negotiated rulemaking. I’m very much looking forward to having our new mediators involved in these new projects.”

The mediator class of 2019, as all other mediator classes, is assigned a peer mentor whose role is to act as an administrative resource, a helpful sounding board, and to assist in facilitating their transition to commissioned federal mediators at FMCS.
Ligia Velasquez, a veteran mediator from FMCS’ Seattle field office who is mentoring her first new class, said she is “excited to be a part of the development of an amazing and very talented group of people.” Velasquez continued, encouraging them to “ask questions and take advantage of all the resources available to them.”

Mediators from FMCS provide services to the federal, public and private sectors in building labor-management partnerships, managing conflict, and averting or mitigating the damaging effects of workplace disputes. During the week-long training FMCS helps the new mediators develop their expertise in building better relationships through joint problem-solving and by advocating constructive responses to inevitable conflict. Ensuring a well-prepared staff early on is important for FMCS and for the overall mission. The ability to help organizations reduce conflict means they will become more efficient, creating more value for customers, shareholders and employees alike, and substantially benefit the national economy.

Many of the new mediators are already experienced labor-relations professionals. New mediator Kevin Wagner, assigned to the Washington, DC field office, has a background on both sides of the negotiating table and as a neutral, previously working for the National Air Traffic Controllers Association union, working for a neutral labor arbitrator, and working as director of labor relations for Bloomberg BNA before coming to FMCS. He also is a third generation FMCS mediator. “My father and grandfather were both federal mediators, so I’ve been around the agency my whole life,” he said.

“I’m very happy to continue that legacy here at FMCS,” Wagner said. “I look at mediation as more of a vocation than a job. When you really want to do this, it’s not really work. I’m excited about the variety of work we will be exposed to. Whether it’s collective bargaining or (alternative dispute resolution), I enjoy not having a foot in one bucket.”

At the end of the training, the new mediators will return to their respective field locations to continue working alongside more seasoned FMCS mediators until they begin working their own cases.

Giacolone offered his advice to the new mediators. “Be a good listener,” he said. “That’s half of what we do, making sure we understand what the problem is that the parties are facing and understanding it completely. That helps us to help them and helping them is what it’s all about.” 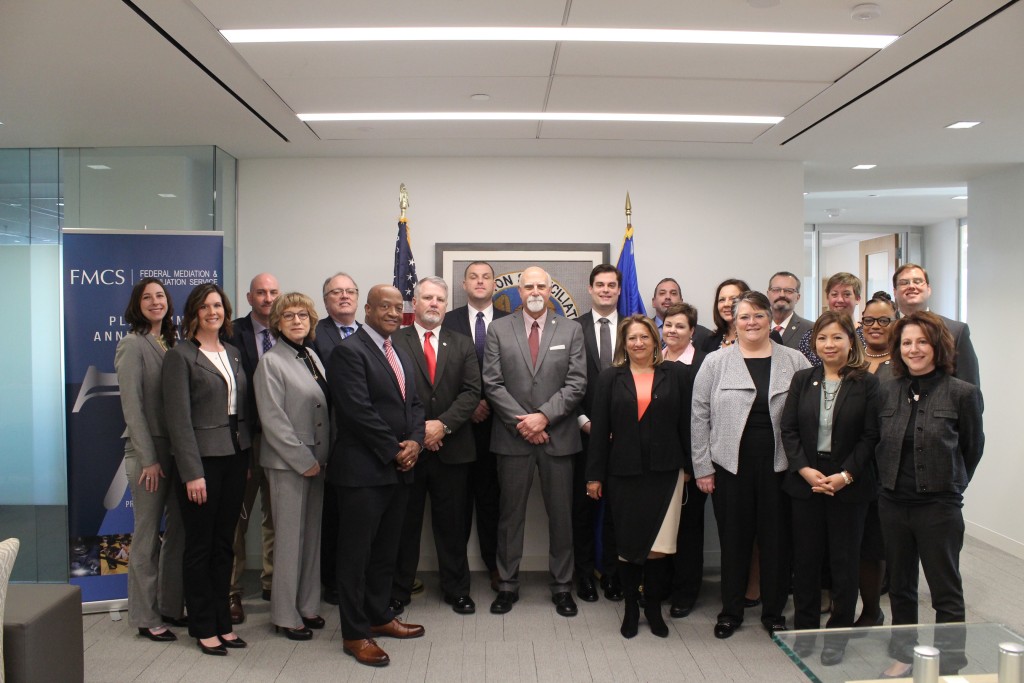 WASHINGTON, DC (March 19, 2019) Federal Mediation and Conciliation Service (FMCS) Deputy Director Richard Giacolone (center) poses with newly commissioned federal mediators from around the country at the FMCS headquarters. The mediators were at the headquarters to attend a five-day training program to prepare them for their role in helping to resolve labor-management conflicts, build better relationships, and create more effective organizations. (FMCS Photo/Heather Brown)