WASHINGTON, D.C. — The Federal Mediation and Conciliation Service (FMCS) and the Federal Labor Relations Authority (Authority) have announced a new commitment to work together to provide labor organizations and agencies with an opportunity to resolve negotiability appeals before they are considered by the Authority’s Members for a decision. Negotiability appeals arise when there is a dispute relating to whether an issue is outside the statutory duty to bargain. 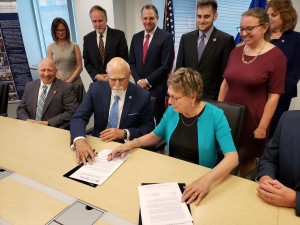 In a ceremony at FMCS headquarters on June 27, Authority Chairman Colleen Duffy Kiko and FMCS Director Nominee Richard Giacolone signed a memorandum of understanding (MOU), creating a new pilot procedure for resolving negotiability appeals at no cost to the parties. Under its terms, FMCS will develop a unique cadre of mediators, who will receive specialized training from the Authority, to assist the parties in the resolution of negotiability appeals through mediation.

“I am excited about the opportunity to partner with FMCS and their outstanding team of mediators,” said Chairman Kiko. “The Authority is committed to fulfilling our statutory obligation to expedite negotiability appeals to the extent practicable and to resolving these matters as quickly and efficiently as possible in order to advance the process of collective bargaining. This pilot program with FMCS is a great first step, and we hope to continue our collaboration.”

Director Nominee Giacolone said, “It is our pleasure to use alternative dispute resolution to assist the Authority in the furtherance of productive federal sector labor-management relations. I am confident that our expert mediators will quickly make a real difference in resolving disputes among the parties appearing before the Authority. I look forward to FMCS expanding the work our Agency does on behalf of our federal agencies and dedicated public servants.” 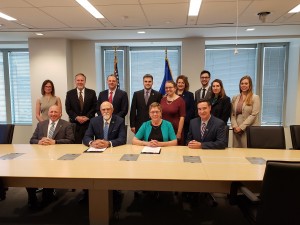 WASHINGTON, DC (June 27, 2019) Representatives from the Federal Mediation and Conciliation Service (FMCS) and Federal Labor Relations Authority (FLRA) gather for the signing of a Memorandum of Understanding for a new pilot procedure for resolving negotiability appeals. (FMCS Photo/Greg Raelson)